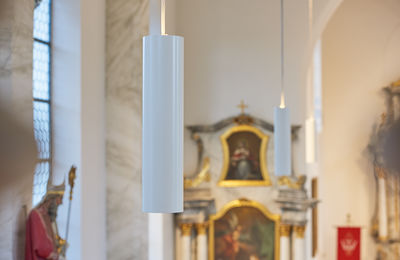 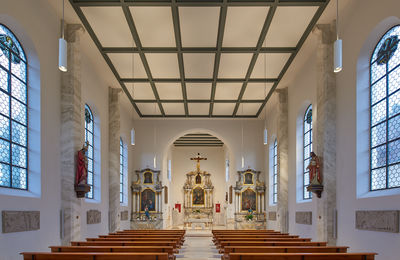 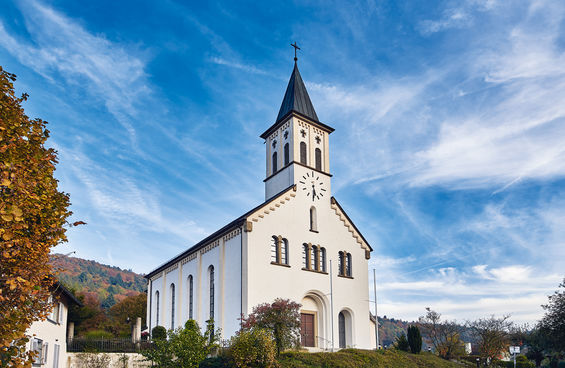 This modest country church has been at this site since 1835. It was planned by architect Heinrich Hübsch with modern arched windows and a classically structured façade. It is considered an example of early historicism. April 2015 saw a fundamental renovation under both energetic and aesthetic considerations.  Lighting played a pivotal role for visual room design. ”When we discussed the artificial light in the church for the first time we immediately agreed that we did not want opal glass luminaires and the resulting high luminances,” says Michael Djebbar and adds: “The first photometric calculations showed that we could only work with direct light due to the bright surfaces prevalent in the church and that we wanted to obtain diffuse portions nevertheless. Although we do not expose the walls to direct light the ambient brightness is good,” adds Bernd König.

This is why custom-made pendent luminaires are now lighting the church, with separately switchable direct and indirect light emissions, by means of 1-10V ballasts the light can be dimmed to the desired atmosphere. A warm luminous colour of 3,000K was opted for to attain an atmospheric mood.

Here the direct and indirect portions of light have a half-peak divergence of alpha 60°. Thanks to this wide-angle light emission the light cones overlap so well that both the ceiling and church pews are evenly lit.

The ballasts are integrated into the luminaire housing. The luminaires made of extruded aluminium sections only measure 130mm in diameter and 550mm in height, nevertheless. The two XICATO modules used for direct and indirect light feature 20W or 29W, alternatively.